Managing risk is something we all do on a daily basis, but it often occurs subconsciously.  Whether or not to speed on a highway, or check our phones while we’re in traffic, is a decision that occurs based on our experiences and biases.  The risk associated with a financial strategy is far off from a speeding ticket however and it is important that the conversation occurs.  We provide an offering of strategies to support various concerns at various stages of our clients’ lives.

When it comes to insurance, people often believe life insurance is a “necessary evil”.  No one likes to think they’re going to pass away prematurely and therefore, the conversation often has a negative undertone.  Working with Bona Vita Benefits could help you better understand the different types of life insurance and what might be suitable for your situation.

A property manager for a boutique real estate management company was slightly unsatisfied with the amount his profit sharing retirement plan allowed him to deduct for retirement.  He had done some research into different strategies for funding his retirement.  Due to his household income, he was not eligible for a Roth IRA and since he was participating in his employer sponsored retirement plan, he could not access any other retirement strategies.  After working with Bona Vita Benefits, he was able to purchase a life insurance policy that protected his family in the event he passed away in the near future. The policy he chose also had the ability to accumulate cash value over time. Any cash value that accumulated could be accessed via loans and withdrawals to provide him with a source of tax-advantaged supplemental retirement income. Note that outstanding loans and withdrawals reduce policy cash values and the death benefit and may have tax consequences.  This strategy is not suitable for everyone and an individual needs analysis is required to determine whether or not your circumstances require additional sources of tax-advantaged income.

Case Study 2: Term 20 and a Mortgage Pay Off

A young family had just moved into their home and was looking to provide insurance in the event that either the mother or father prematurely passed away.  Their children were nine, seven and three years old.  At the end of twenty years, they believed the children would be more independent and the need for carrying a large amount of insurance was unnecessary.  The family considered their options and after some deliberation, decided to each purchase a Return of Premium Term policy for twenty years.  Their policies would protect both the mother and father for one million dollars each and at the end of the term period, should they survive their policies (and pay all premiums on time)—they would receive every dollar they paid in premiums back.  After running an amortization report on their mortgage, it was discovered that they could use the premiums they would receive back from their insurance policies to help pay off their mortgage early, if desired.

Case Study 3: Life Insurance and Chronic Illness Protection in One

John is a sixty-two year old divorced male with three adult children.  He has a total savings of $500,000 and is still working.  He is concerned with providing insurance to his family in the case he passes as he still has a mortgage on his second home and doesn’t want to leave them with debt.  John also has concerns over who will take care of him should he become unable to live independently in the future.  He knows his children are spread thin as it is.  Most of them have jobs, growing children and even tertiary responsibilities in various organizations.  John worked with Bona Vita Benefits to secure a life insurance policy with a rider that could provide him with a monthly benefit that could be used to pay for his care if he is unable to provide it himself.  Riders such as the one John chose can be used to help prevent other assets from being drawn down in the event of a qualifying illness.

*Each of these case studies are hypothetical information and not representative of a particular product.

It can be easy to think of the coverage you need for all of your “things”: car insurance, homeowner’s insurance, property insurance, etc, and overlook your biggest asset: your ability to earn a living.  When your medical bills increase and your income decreases, your financial picture can deteriorate quickly—but disability income insurance can help protect you and your income from this possibility. 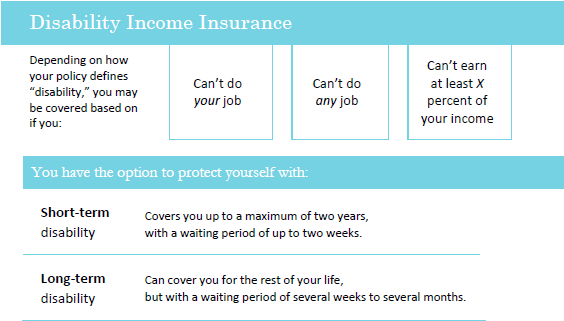 70% of people turning age 65 can expect to use some form of long-term care at some point during their lives.  While you can’t predict if you’ll be in that 70 percent, you can prepare for the possibility with long-term care insurance. 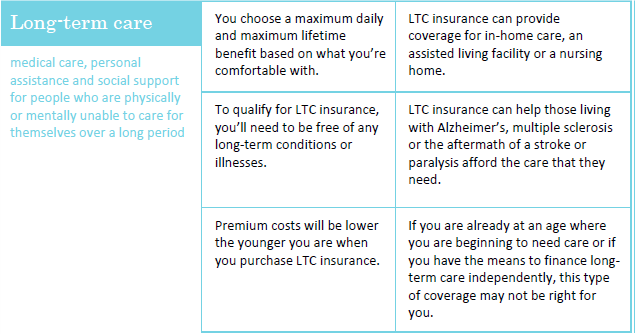